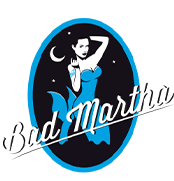 Martha's Vineyard namesake beer launched May 29, 2013 on the Island. A portion of her profits benefit The Island Food Pantry. Also available the greater Boston area, Cape Cod, Martha's Vineyard and introducing Rhode Island! The new Bad Martha Farmer's Brewery is located in Edgartown on Martha's Vineyard. 508-939-4415 www.badmarthabeer.com The lore of Bad Martha: On the bottom of every six-pack one can read the Legend of Bad Martha: "In 1602, mischievous winds drove Bartholomew Gosnold's ship to Martha's Vineyard. As legend has it, he scoured the island for ingredients to brew ale for his crew. Alas, he found none and fell asleep on the shore. Under the light of the full moon, he awoke to a sensuous mermaid with jet black hair and a devilish grin. Sitting at water's edge, she beckoned to Gosnold. The closer he got, the further she swam- tempting him to follow. So he did. Finally, he found himself in a field brimming with lush island grapes. These would be perfect for wine, he thought. But nay, he was an Englishman, so these grapes became the secret ingredient for a robust, refreshing beer. Gosnold never saw the mermaid again. He went to his grave wondering if he ever saw her at all. Today, we brew every handcrafted beer as Gosnold did, with grape leaves harvested on the Vineyard and a splash of the mermaid's mischief. Naturally, we had no choice but to name our beer after the elusive siren who started it all. Bad Martha." Please note: You must be 21 years old or older to enjoy this page (Legal Drinking Age). We take underage drinking very seriously. Please share content with only those of Legal Drinking Age.

This is a public event for all to join and show our support and bring awareness to the Movemeber Foundation and local men's programs.

Do you know someone with an epic Mustache? Have them come down, take a selfie with Martha and enter to win a $50 Gift Card!

We’ve got faux “ staches for the kids and adults.

We’ve got @djsprino coming to spin some tunes at the brewery.

This surely will be a fun day in Falmouth.

Bad Martha Beer
Hope you all had a restful and thankful day!

Join us tomorrow @badmarthafalmouth as we are excited to welcome Ben Stadelmaier. He is one of our featured artists who will be set up on our front porch.

Come on down to @badmarthafalmouth

I'll see you at the Bash, The Movember Mustache Ba

Hope you all had a restful and thankful day! Join

Join us @badmarthafalmouth for some live music and

Just a small gesture we can offer to those who hav

Thank you for your service!

Exercise your right to vote tomorrow.

It’s that time of year again where we bring awar

Both breweries are enjoying a beautiful fall weeke

Get Bad. Do Good. Charity Bingo is back @badmartha

Friday's are for pizza, beer, music @djsprino, and

Who doesn't love the nostalgia of Friday nights go

See you for trivia @badmarthafalmouth